This project has moved on a bit: Now the 2M400R-SP

This project has been quite a journey and taken several years, but we feel that the end result has been worth it. We developed the 2M400R-SP as the spiritual successor the much loved Yamaha RD-350 YPVS F2.

Well, nearly there. The flywheels had the balancing holes cut via wire erosion process to a very small interference fit. We then installed the tungsten slugs using a bit of Loctite to be safe. As there will be no axial load, this installation method should easily be sufficient to keep the slugs in place.

Here is a picture of the crank flywheels. One before installation and one with the tungsten slugs installed. 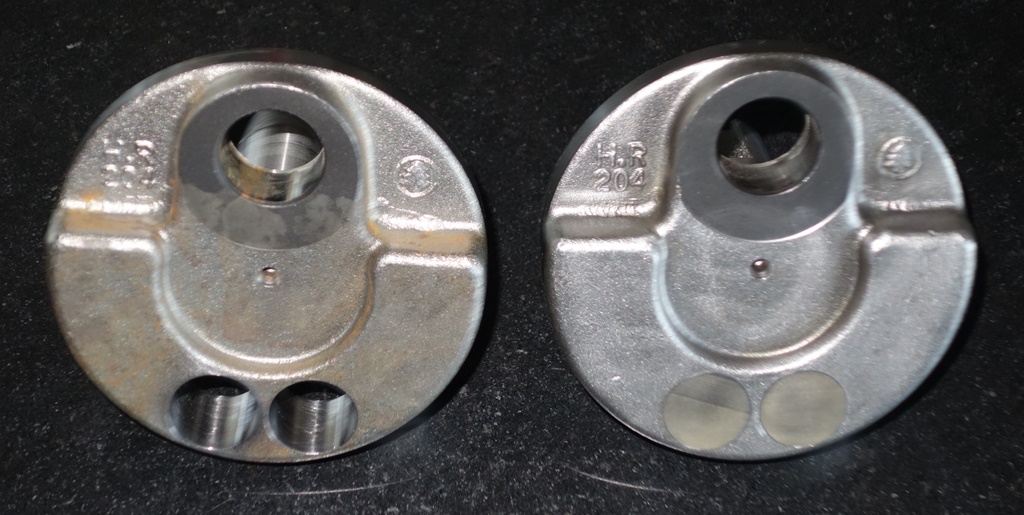 All the crank parts are off to get re-assembled next week, and then the engine re-assembly can begin. Hopefully, we can get the bike back on track (or road) by Spring time!

A bit more on balancing an RD-350 YPVS crankshaft 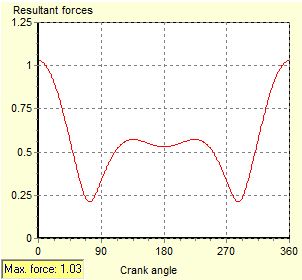 In the previous blog post, we tried to reason why we decided to try and re-balance the crankshaft on our RD-350 YPVS engine. In this post, we'll illustrate the process we followed, our findings, and the results of the computer simulations. In a subsequent post, we'll show the reworked crankshaft, and final results from actually running the engine.

So, the first thing we did is measure the actual balance factor of the standard crank. Well, actually it was a "standard" Hotrod +4 mm stroke crankshaft. We didn't bother measuring a stock RD-350 crank, but wouldn't expect it to be far off the Hotrod one in terms balance factor as the flywheels are virtually identical. We found the required weight to balance the crank to be 187 grams. Now, by weighing the reciprocating components, we the following actual balance factors:

As you can see, the balance factor is not even close to the commonly accepted range of 50-60% for 180 degree, parallel twins. It is now wonder that they require the two tie-rod underneath the engine to keep the vibrations at bay. If you look at an RD-400 crank from the previous generation, water-cooled engines, they have lightening holes and a lead counterweight in an attempt to balance the crank. No such attempt seems to have been made on the RD-350 crank. We heard it said that this was due to cost constraints at Yamaha. How true this, we have no idea, of course. Surely, the addition of the tie-rods had a cost as well.

No matter, though, it was clear we wanted to improve on this. Thankfully, Tony Foale has a free crankshaft balancing calculator on this website, here: Freeware from Tony Foale. There isn't an ideal balance factor, and what you eventually choose depends on many factors including frame stiffness, engine mounting, forward tilt angle of the cylinder, etc. However, we went with a fairly conventional 57% based on the lighter weight Vertex pistons we were planning on using. This should be a considerable improvement over the standard one and the out-of-balance forces, according to Tony's calculator are shown below. The plot on the left shows the primary and secondary forces from the 15% balance factor and the one on the right from a 57% balance factor. You can see that the peak force is considerably lower with the 57% balance factor as well as the uniformity of the forces. 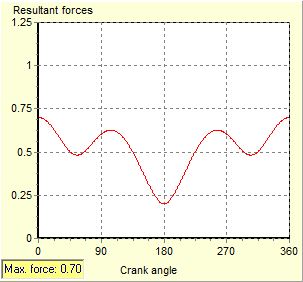 In order to achieve the higher balance factor meant meant either adding mass in the counter weight area of the flywheels, or removing mass around the small end pin. To try and predict the best way to accomplish this, we decided to perform a bit of computer modelling. So, we first created a model for the entire crankshaft assembly including conrods with bob weights representing the pistons. And, a second model of just one half of the crankshaft, i.e. a single cylinder. Since this is a 180 degree, parallel twin engine, it is possible simplify the computer simulation to a single cylinder.

We then started to remove material (via the computer modelling) around the small end pin. It quickly became evident that this wasn't going the enough to achieve the balance factor. We also tried a hollow small end pin, which still wasn't enough. So, we needed to consider adding more mass to the counter balance weights, i.e. opposite the small end pin. We opted to use Tungsten dowels rather than lead as it has higher density. The following picture shows the fully balanced assembly with the Tungsten slugs clearly visible.

So, with the balancing requirements worked out, we needed to get the holes cut in the flywheels. In order to create a suitable press fit, we opted for a wire erosion process. We are now awaiting these to come back from the local machine shop. We post the outcome and verification of the balancing in the next post. Stay tuned!

Why Re-balance the Crank?

You could rightly ask why we bothered trying to re-balance the crank on a well-proven RD-350 YPVS engine. Well, it's the classic tale of one thing leads to another, I'm afraid. To recap this project, we wanted to create a hybrid utilising the venerable RD-350 YPVS engine and put into a more modern chassis. It provides the platform to a vast array of "hop up" parts courtesy to our US cousins who go wild with their Banshee quad bikes. So, using this base engine in a modern 250 sized chassis meant to us a 2-stroke bike that could be developed as we go. 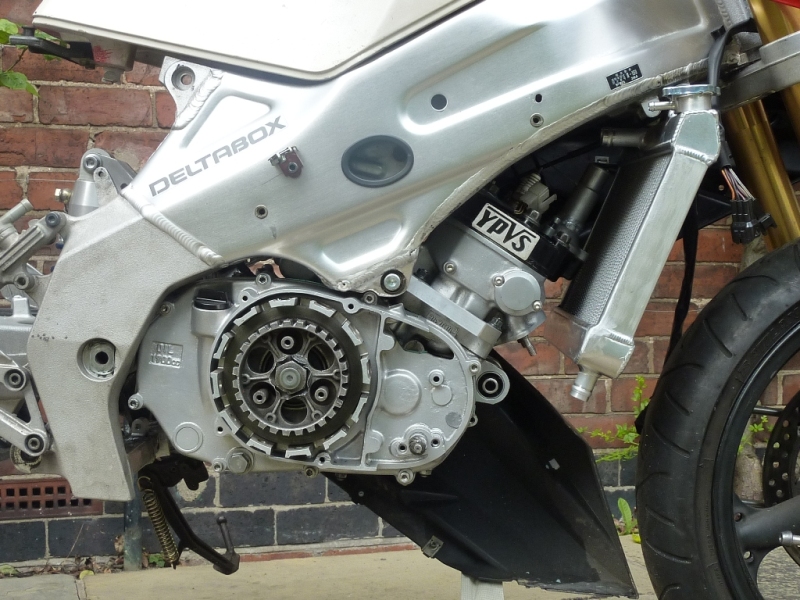 The YPVS engine is fairly long, so the TZR-250 3MA chassis is a perfect combination since the 3MA frame is fairly long when compared to 250 chassis that use a V-twin engine, e.g. the 3XV. The 3MA chassis uses engine mounts at the rear and top of the engine, i.e. there is no engine cradle like on the RD-350. So, rather than adding weight, we decided to utilise the top engine mounts and suspend the engine without an underslung engine cradle. This meant making special brackets that picked up the outer cylinder base mounts and located the top mounts near the extreme left and right side, and mounting the engine much more solidly. It also meant there was no point trying to put the standard Yamaha engine tie-rods back on.

We track tested the bike in this configuration and it behaved very well indeed. It was a successful first step even though the engine setup was far from perfect. Although not excessive, the engine vibration made themselves felt. This is something we wanted to try to address in a subsequent engine rebuild. Well, that opportunity arose sooner than we expected when the right cylinder lunched its piston.

This provided us the opportunity to make a number of upgrades which are detailed in the preceding blog post. The key one for this article was the 58 mm (+4 mm) stroker . We chose the one sold under the Hotrod brand, which is a Taiwanese product.

As we said at the beginning of this post, one thing led to another...but we are where we are. Our next post will go into the analysis and engineering of the actual balancing work.

So, there has been quite a bit or work that's happened over the last many months, although with much varied intensity, i.e. not much intensity at all at times. After the last piston failure, we decided to do a more thorough overall of many of the parts inherited from when we purchased it a couple of years ago.

The objectives of this "rebuild" was:

So, what have we done so far:

We'll detail the individual items in separate blog posts. The first one we'll detail will be the balancing work we're doing on the crankshaft.

This idea developed soon after I got my hands on the Yamaha YZF-R125 fairing set. I always liked the single, asymmetric headlight look that is common on endurance racebikes. It will also help to give the bike its own identity away from the YZF-R125.

This meant filling in the left hand side headlight. I started with simply putting 3 layers of fibreglass over the original headlight. After it cured, I trimmed the fibreglass layup to fit the headlight opening and used a bit more fibreglass to bond it in place. Here is a picture of the partially finished, single headlight, nose cone. It needs a bit more filler and sanding before it is ready for paint.

Well, I finally managed to edit the video I took of the first startup. With no stinger nor silencers, and no water running time is obviously short. Still, it was nice to hear it roar to life! This is also the first time, the forward engine mounts got any kind of test. Clearly not a full test, but so far it looks very encouraging. While still rubber mounted, the engine has none of the engine rocking couple that the standard mounting system exhibits. And, the engine vibrations are still pretty well dampened with only a very modest amount being transferred into the frame. All this without the stabiliser bars!

Well, the big moment in every special builders project had finally arrived. Everything was triple checked and neighbours alerted to keep a look out for small explosions. As the bike doesn't have a kick starter due to the engine having TZ350 side cases, we used the external starter from my 95Racer. Luckily the crank turns the same way on both. So, using a 19 mm socket on the flywheel side, the bike started easily. It is a bit loud without silencers so kept running time to a minimum. We were, however, able to check all the functions of the Ignitech unit. Kudos to these guys. They build a very good product providing incredible value. We'll put up a more detailed post about the ECU and its function shortly.

One of the features on the Honda NC30/35 swinging arm hub we didn't particularly like, was the rear wheel nut arrangement. This is probably due to the inevitable comparison to the way Ducati designed it. So, after a bit of measuring up and thinking, we decided to convert to use a single threaded wheel nut, and do away with the long bolt that goes through the standard Honda hub.

If you've seen the pictures of the bike further down with the rear subframe and seat panels fitted, you'll have noticed the absence of the fill-in panel where the seat frame meets the tank and main frame. This seemed like a good excuse to try our hands at using automotive styling clay to shape this area, then make a mould and finally a carbon fibre fill in panel. I did quite a bit of research into how this might work before diving in head first. There are plenty of instructive videos on Youtube. Also, we were lucky enough to find a source of surplus Chavant clay, which is what the professionals use. So, after a bit of work, here is what the styled clay filler panel looks like.

Progress on the wiring loom

As I am using a new ECU (Ignitech) and replacing the TZR clocks with the YZF-R125 clocks, it was easier to just start from scratch on the wiring loom. It will certainly make it tidier as opposed to splicing into the standard loom. Plus, with virtually every electrical component being relocated, there really wasn't any other choice. So, in the old tradition of making wiring looms (learned this many moons ago) I measured the lengths of all the loom runs and placed nails accordingly on a piece of plywood. The wires are all new and were sourced from Kojakat, whom I can easily recommend.

Here is the loom prior to wrapping. 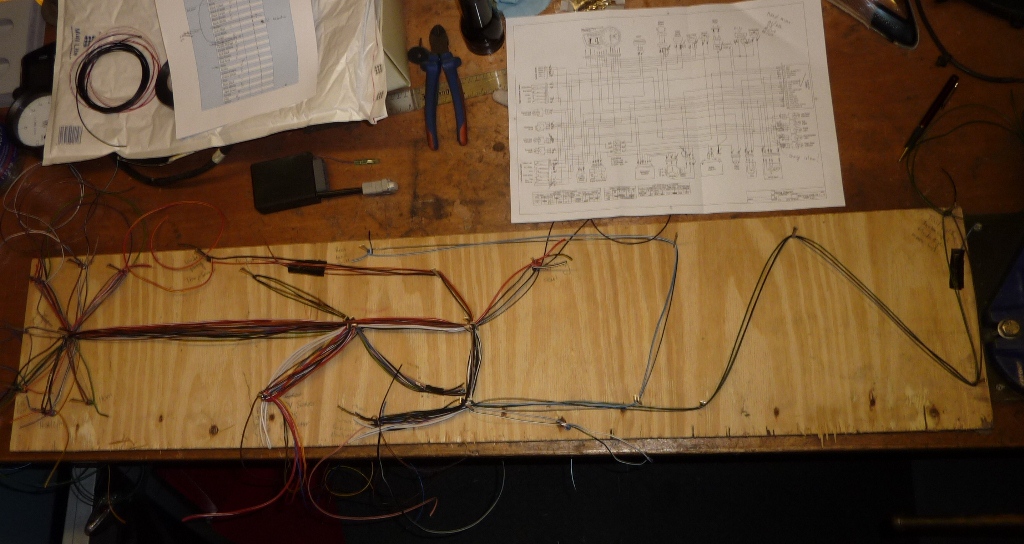